The Federation of Khoja Shia Ithna-Asheri Jamaats of Africa (Africa Federation) was formed in 1946 for the purupose, mainly of bringing together all the Jamaats in Africa representing the KSI community under one federal organization. The aim was to ensure development and progress in the Jamaats through unity and collective efforts in the formulation of  vision and planning to achieve the common aims of the individual Jamaats. By the Grace of Allah (SWT) and through the visions and endeavours applied by the successive leadership of the Africa Federation and the co-operation from the Jamaats, the Federation has  succeeded in advancing its Aims and Objects through the vissitudes of times.

Development and Progress in the religious, socio-econmic andeducational spheres through unity has been the hallmark of the Federation. The famous slogan of “EK Bano, Nek Bano” introduced by the President Alhaj Ebrahim Sheriff Dewji during his term; 1958 – 1964 reflected the core mission of the Federation which is UNITY of  Purpose and Service.

After 50 years of its successful Mission and Services, the Africa Federation is now launching and introducing a new LOGO for itself replacing the current one as a mark of the Federation continuing ahead in its journey of history.

Looking into the records of the past, the current Logo was designed by Alhaj Habib Abdulla Khalfan (the younger brother of Alhaj Mohamed Abdulla Khalfan) in 1966 when he was then a resident of Mombasa. The Logo he designed was selected in a competition organised for this purpose by the Secretariat of Africa Federation and an Award was presented to him.

The old Logo Afed being replaced 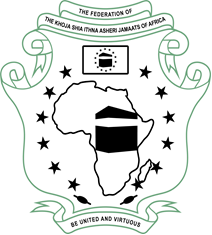 Brief information about the new Logo:

The Logo has been designed and developed to illustrate and symbolize our Institution in keeping with its core values, the identity and attributes aptly reflecting the image of the Institution as it advances in the journey of development and Progress consistent with its Aims and Objects.

A brief notation of the Logo design concept:

The new Africa Federation Logo is being launched on the Wiladat of our 1st Imam, Hazrat Ali Ibn Abi Talib (A.S.) on the 13th of Rajab, 1438 A.H.  (11th April 2017). This will be the official Logo of the Africa Federation henceforth.

Below are some of the photographs of the official launching of the new Africa Federation Logo in Dar es Salaam at the Imambargha on the eve of the Wiladat of the 1st Holy Imam, Hazrat Ameer-al-Mumeen Ali Ibn Abi Talib (AS). 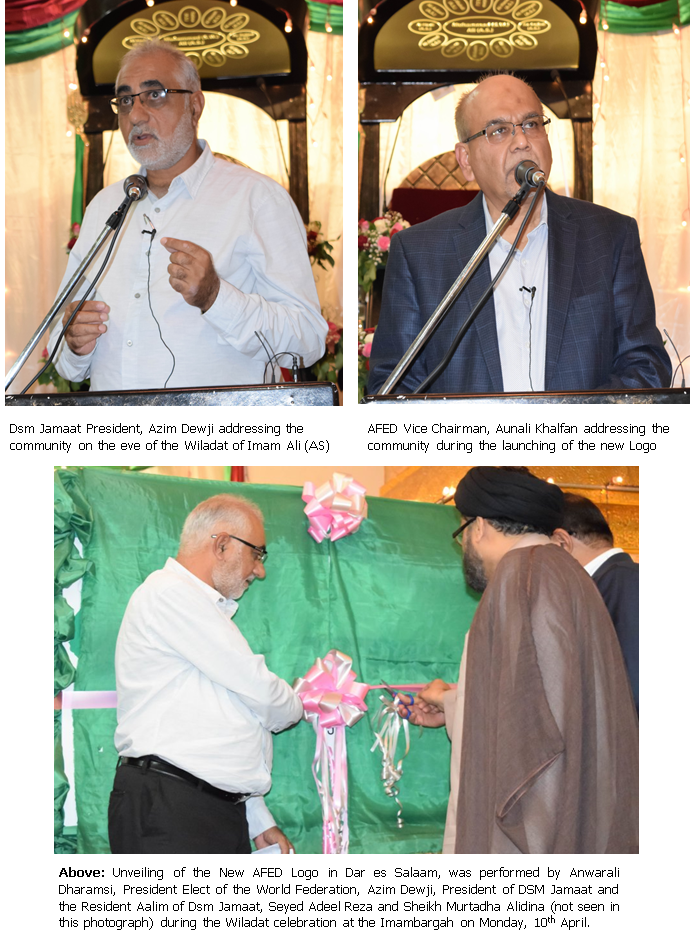 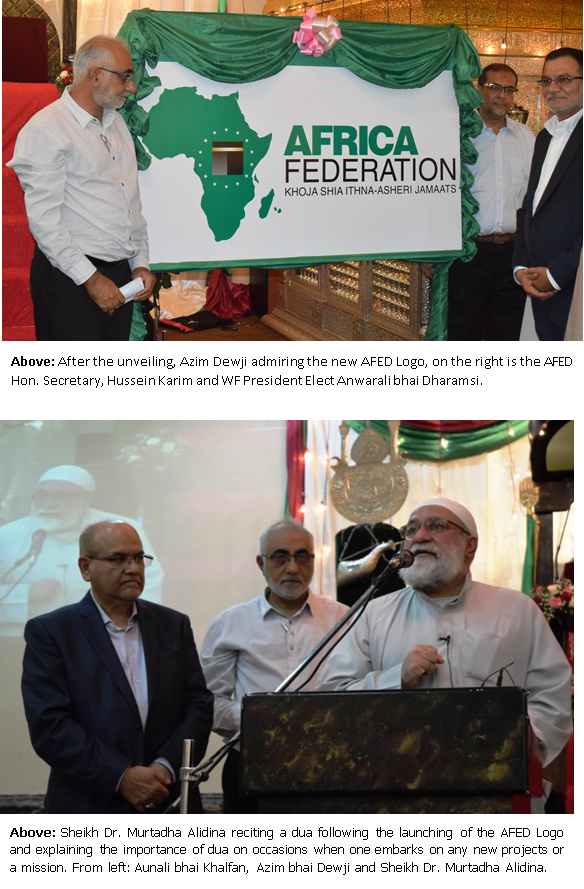 We wish to express our sincere appreciation to Alhaj Azim Dewji and Dar es Salaam Jamaat for providing us the opportunity to officially launch the new AFED Logo in spite of the tight schedule on the night of the Wiladat celebrations etc.

We also wish to thank the Jamaat Secretariat and Media Room for their support and cooperation.

We wish to recognize the presence of Alhaj Gulamabbas Khaku, the AFED Electoral Commissioner from Mombasa during the launching of the new AFED Logo.

Please let us remember all our past leaders and elders of our community with Sura-e-Fateha for the maghferat of their souls – Ameen.

admin - June 28, 2017
0
The World Federation has launched its annual FILL MY CUP APPEAL 2017 to raise funds to provide a hot nutritious breakfast for children in...