Every Thursday evening, the MIC members gather at the center for the weekly majalis. The majalis program includes recitation of Surah-e-Yaseen, Hadith al Kisa, Dua-e-Kumail and a short lecture on any topic (religious/social/academic) by any one member. Since the center is now equipped with its own laptop and projector, presenter can conveniently display his/her lecture on the projector.

The center had started a new routine on Tuesdays whereby the members meet up for recitation of Dua Tawassul followed by Tafseer of the Holy Qur’an. During every session, one member comes prepared and conducts the Tafseer of Quranic verses followed by the discussion on the same. This initiative is quite fruitful as the members get a chance to discuss the words of Allah (SWT), and contemplate on them. 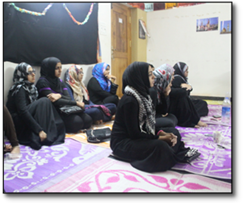 The birth anniversaries of the Aeema-e-Tahireen (A.S.) are celebrated in the center. Every kushali program would begin with Hadith al Kisa, Qasida/Munajat followed by a short talk by any member. After the program, the center would hold group activities like short quizzes, etc. 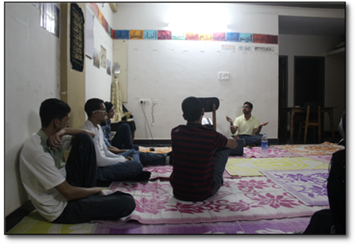 The death anniversaries of the members of the holy household are commemorated at the center. The majlis included recitation of marsias, followed by talk on the Ahlulbayt (as) by any of the member, or projecting a pre-recorded majlis & lecture by some renowned scholars.

Amaal for the Oppressed

In September, an Amaal program was held to pray for the oppressed people around the world, especially in context to the worsening situation in Syria and Iraq.

The program proceeded with a talk by Br. Kumailabbas Dewji who highlighted the situation in Syria, Iraq along with many other Muslim countries. He also stressed as to what we can do as individuals and as a community. The program ended with the recitation of Dua Jawshan-e-Sagheer.

The members decided to utilize this great occasion of the birth anniversary of Prophet Muhammad (saw) to take the message of Islam and spread it to students all over Manipal, following the great example of our Holy Prophet (saww) and the importance of tabligh. 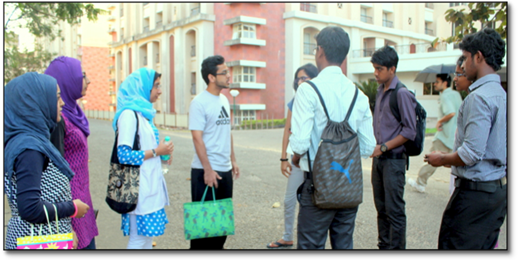 The members divided themselves throughout campus and popular spots where they interacted with all students (Muslims and non-Muslims), distributed chocolates and took the opportunity to impart some information about the Prophet and about Islam to the students. Some of the members carried along with them the Holy Qur’an, and found a lot of interest from the non-Muslims. It was a successful and productive event. 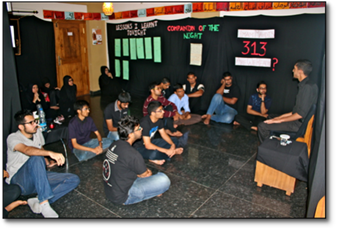 The theme of the Ashra majlises for Muharram 1435 was “KARBALA TODAY”. One of the main aspects of this theme was “Imam Mahdi (ajtf)’s 313: Are we ready”?

The students volunteered and prepared the center for the month of mourning, sticking of posters in and around the center, and preparing the Ashra-e-Aza’a.

Majlis was held on all the 12 nights. The center was honored to have Prof. Karim Manji to speak for 3 nights, after which the members Br. Aliasgher Janmohammed and Br. Mohammed Nazerali recited majlis for the rest of the nights. Some of the topics of these majlises were “Science in The Holy Qur’an”, “Knowing and preparing for the Imam Al Mahdi (ajtf)”, “The Ahlulbayt (as) according to Shia and Sunni sources”.

The center also set up a Information Notice Board termed “Lessons I learn tonight”, where the members posted their inputs during these nights. The members also volunteered to find out about the different companions of Imam Husayn (as) and their contributions for Islam in Karbala. A poster on each companion was made and displayed. 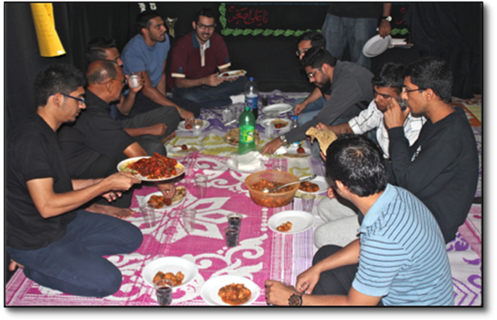 On the day of Ashura, all the members gathered at the center for Amaal-e-Ashura which began with Dua Nudbah (as it was a Friday), followed majlis and niyaz after namaz-e-jamaat.

Arbaeen: Br. Aliasgher Janmohammed gave lecture on the day of Arbaeen at the center. Niyaz was served to all the members after the majlis.

The Centre: The Masumeen Islamic Centre (MIC) has been established in Manipal since 3 years ago near the University to facilitate the social and religious gatherings of the students from Africa, there are about 40 students studying in Manipal in different fields, and the Centre has been a convenient place for our activities. The Education Board of the Africa Federation provides financial support for the Centre. Other activities are all covered by the students themselves.
Secretary

From the members who have joined the MIC family

Living away from home can be a really interesting and an unforgettable experience, but at the same time it has very important effects on one’s life.

Masumeen Islamic Center was a platform for adjustment and change. It feels good to say take care but it feels so much better to feel and hear someone saying it. I have to say, I have got a new family who are sincere, active, and wonderful. My appreciation to all the seniors and members who run the Islamic center. The best thing is that we would stick to our values and change those that you believe could be improved.

Oh Lord, let this new year start with this great revolution change us for the best

Salaam alaykum. I thank the Almighty to give me an opportunity to study abroad in Manipal. The Masumeen Islamic Centre in Manipal is a blessing indeed for all the shia students studying here. It gives one a sense of belonging and an atmosphere where you feel that you are at home although away from home. However, most importantly the centre has made possible for the students to practice their religion freely be it in the month of Muharram or the month of Ramadhan or any other day. It is also a training ground and an opportunity for the students to prepare themselves to be the future leaders of the communities they belong to as the centre is run and maintained by none other than the students themselves. Ahsant!

Salaam Alaykum. MIC is a means of continuing our spiritual nurturing that we had started back home. Not only do we gather and carry out the necessary obligations, but also understand and learn other points of views and opinions on the matters that are significantly important in the religion of Islam. It is that place, which gives us the unique opportunity to strengthen our relationship with the Almighty God, collectively.   Iltemase Dua.

From the ones who are bidding farewell to the MIC family

What a feel is that to have an institution like MIC in Manipal is very important. MIC has brought all of us together and has really given us a change in terms of our interpersonal skills and not forgetting the spiritual aspect we feel that we are at home and it’s because of this that many of us get the chance to improve our recitation skills and discuss important matters relating to the community at large Therefore I feel that this institution has to continue and will blossom we feel home with this

Having the MIC has been a huge blessing for me, helping me get through my four years in Manipal. It has made manipal feel more like home, a place to get in touch with my community and uplift myself spiritually. I cannot imagine what Muharram, Ramadhan, tuesdays and thursdays would have been like if we did not have the centre.

My community, the Masumeen Islamic centre, is a blessing for all of us here at Manipal University. It is a home away from home and an identity for us. It brings us together as one while increasing the bond of community where we support one another and pushing ourselves to become a better community. I truly feel blessed to have been part of such an intellectual community at the same time having our core Islamic and cultural values

Living in a foreign country surrounded with a complete adverse cultural background, it sure was cumbersome to keep up with our spiritual selves. Manipal centre has indeed made us feel at home away from home. I was particularly pleased with the daily gatherings for Iftar and dua during Ramadhan, the ritual saf matams and niyaz on the month of Muharram, the Thursday night gatherings and the Tafseer sessions every Tuesday. Such programs preserved our religious backgrounds and eased the balance between our studies and spiritual exercises. I amm truly thankful to the organizers for creating such an amazing centre.

Our centre began as a meeting place for dua on Thursdays only, and eventually became the venue for every majlis, be it wafaat or khushali. Going to the centre was made a part of my schedule, despite the busy lifestyle, as it would always bring me peace and harmony, along with a great sense of belonging. It also allowed me to meet with my fellow members amidst the busy days.

While having a lecture, amaal or dua, the atmosphere would be beautiful, and so much so, that it would remind us of our gatherings in Dar es Salaam. The best of moments would be during Ramadhan and Muharram, which is something indescribable.

Most importantly, the centres allowed us to upkeep with our spiritual lives and bring about unity amongst us.

Various activities carried out at the centre has taught me alot, and I pray the centre continues on, so that it may be beneficial for our future brothers and sisters to come.