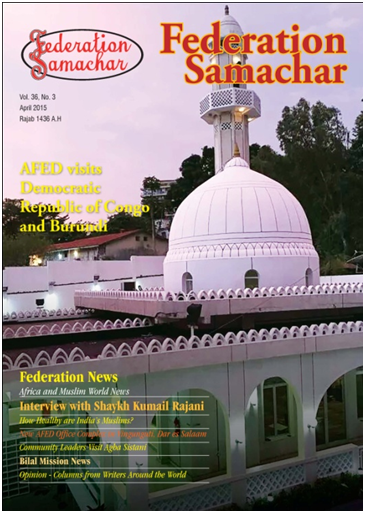 The April 2015 issue of the Federation Samachar, the magazine of the Federation of KSI Jamaats of Africa, was released in Dar es Salaam on 29th April, 2015. Copies will be available to Jamaats in Africa from this week. Jamaats outside Africa will receive copies in the next few weeks.

This 104 page issue carries news and views from correspondents and guest columnists from around the world. Global community news include Africa Federation visits to Jamaats in the Democratic Republic of Congo and Burundi, the World Federation President’s and Africa Federation Chairman’s joint visit to Iraq and a progress report of the Africa Federation Commercial Project in Dar es Salaam.

Also read about the Al Qa’eem residency being inaugurated in Arusha and an update of the Jaffari Complex in Mombasa and the Nairobi Lavington Housing project.

Wider news covers our community’s philanthropy to over 9700 Tanzanians, interfaith activities in Toronto and Britain, water wells being built in Pakistan and more medical facility liaisons established in India for the convenience of community members.

The Down Memory Lane photographs cover Tulear, Madagascar and Mwanza, Tanzania. The Black and White column provides contrasting views on whether or not our community requires radical reformation and the magazine has an enlightening interview with Shaykh Kumail Rajani.

Do not miss this issue. Copies can be obtained from your local mosque