Inna Lillahi wa Inna Ilayhi Raji’un
We belong to Allah and to Him we shall return. 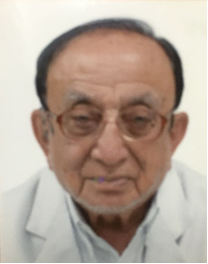 One of the longest dedicated and renowned member of Mombasa Jamaat has bade farewell to this world on Saturday 08th December, 2018, and was laid to rest on the same day. Marhum was born on 14th November 1931 in Mombasa, Kenya.

Alhaj Mohamedjaffer bhai entered into the communal service at a very young age by enrolling as a member of Volunteer Corps of Ithna Asheri Young Men’s Union which was founded in 1945.  He also served a member of its managing committee for several years and also became the Chairman of the Union.

Marhum served as a Trustee of Africa Federation for nine years, and in the same capacity served the Mombasa Jamaat for several years as well as the Ithna Asheri Sports Club later known as Jaffery Sports Club besides serving as the managing committee member of these two organizations.  He also assumed the Chairmanship of Jaffery Sports Club and encouraged youth to excel in the field of sports. As a Trustee he is reputed to keep up-to-date record of Jamaat’s documents, minutes, and other records and was known to be a repository of the history of Mombasa Jamaat.

Like his father Alhaj Mulla Hassanali Khaki and his brother Alhaj Mulla Abdulrasul Khaki he took keen interest in religious education and left no stone unturned in maintaining Islamic ethos and environment at our educational institutions.

Following the footsteps of his father, he represented Mombasa Jamaat as a delegate and councillor at the meetings of the Africa Federation. His knowledge in several spheres were vast, his contribution in the deliberations in the meetings were deeply embedded with wisdom and foresight.

Marhum also served as an active member of Muslim Association of Mombasa and was recognised as having an acumen for perfect organisation.

He was also fond of collecting old photographs of not only Mombasa Jamaat but also of the Mombasa Town also.  He had a nice collection photographs as well as press cuttings and had an archive which is worth preserving.

Marhum Mohamedjaffer bhai will always serve as an inspiration to the young and old in the community, he leaves behind a legacy of values, dedication and honorary services which he has conscientiously instilled in the family to continue to uphold.

On this sad occasion, we send our heartfelt condolences to his family members, friends and colleagues.

May Allah (SWT) bless him with His mercy and grant him a blissful place in the proximity of the Masoomin (AS) – Ameen. Let us remember Marhum with a Sura-e Fatiha.